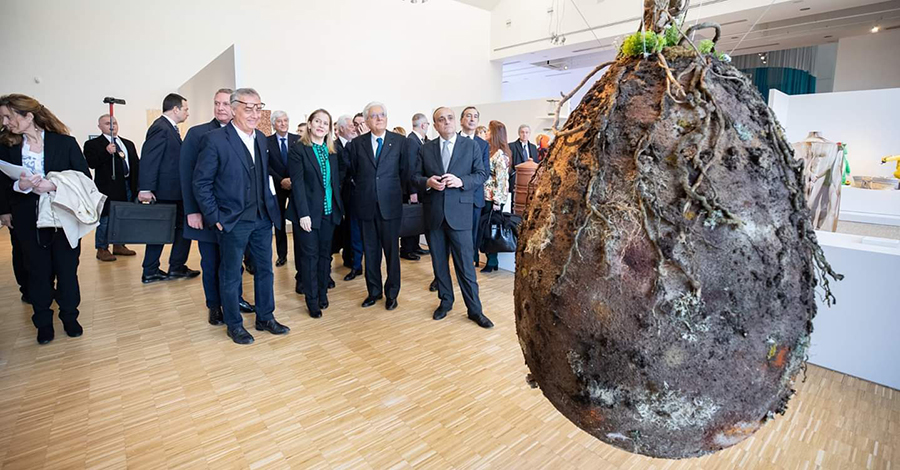 Capsula Mundi at the XXII Triennale in Milan. Among the visitors, the Italian President Sergio Mattarella.

Capsula Mundi is on show at the event Broken Nature: Design takes on Human Survival (1stof March – 1st of  September 2019, Milan, Italy), in the context of the XXII Triennale in Milan, developed by Paola Antonelli, Senior Curator of Architecture and Design at The Museum of Modern Art in New York. Broken Nature is an in-depth exploration of the strands that connect humans to the natural environment that have been intensely compromised, if not entirely forgotten, over the years. By casting a wide net on architecture and design projects, the exhibition will underline the concept of restorative design, highlighting objects and concepts at all scales that reconsider human beings’ relationship with their environments – including both natural and social ecosystems.

The Capsula Mundi prototype is also at the Designing Death (8th of February – 21st of April 2019 at the Libby Leshgold Gallery, Vancouver, Canada). Designing Deathis an exhibition of contemporary funerary architecture and objects. Featuring architects and designers from around the world, the exhibition explores the role of thoughtful and innovative design within the functions and rituals related to the passage from life into death, taking into consideration both the deceased and the bereaved that mourn their passing.

Capsula Mundi has been also shown at the exposition Vegetal House, at the Mumedi Museum in Mexico City, ended the 19th of February, and it’s still on show at the Real Bodies exhibition in Milan, Italy!

Capsula Mundi at the Designing Death in Vancouver.